When Gladys lost both her parents, her local church parish offered her the support and home she needed. She was cared for, given a roof over her head and supported to go to school, along with other children who had also lost their families as a result of the extreme levels of poverty in their rural community.

At the age of 20, while she was studying at senior high school, Gladys, became pregnant with twins. The father of the babies was a boy from the parish, who was working at a small-scale gold mine having dropped out of school. When the time came, the couple travelled to the local regional hospital so that Gladys could get the medical support she needed. It was clear from the start of her labour that she would need surgery to deliver the babies, although they’d need to pay for the operation. The expectant father returned to their town to raise the necessary funds, but in an unexpected, freak accident, a gas tanker exploded in town, instantly taking his life and killing six others.

The young, first-time mother was left devastated with new-born twins, Doris and Dorcas, to take care of. She tried to feed them properly but they struggled to put on weight and each weighed under 4lbs. They were clearly malnourished and at risk of not growing properly without extra support, so they were taken to Sister Jane at the Pears Mother & Babies Centre. 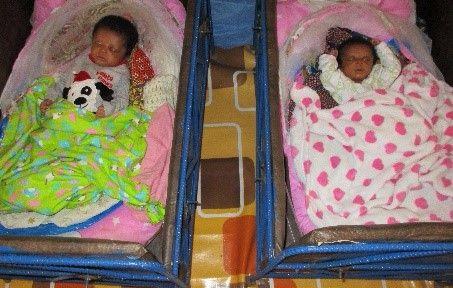 Sister Jane, a trained health worker with over 30 years of experience, has been taking care of mothers and babies for the last twelve years at the centre. She provides babies with the nutrition, shelter and medical care they need to ensure they have a promising start; while also teaching young mothers like Gladys about childcare, including nutrition, hygiene and basic healthcare.

Dorcas and Doris are now a boisterous, 15-month-old pair. A far cry from the underweight babies that arrived at Sister Jane’s door, these healthy, characterful sisters are almost ready to take their first steps!

Sister Jane is very happy with their progress and Gladys plans to return to her studies when the twins are old enough to be cared for by another family member.

Gladys holding one of her twin daughers, Doris, pictured with another young mum at the Pears Mother & Babies Centre

#PromisingStarts - your chance to DOUBLE your impact

Our #PromisingStarts appeal will raise vital funds to ensure more children in northern Ghana have a promising start through life-saving support at the Pears Mothers & Babies Centre. You'll have just seven days to DOUBLE your support through the Big Give Christmas Challenge, the UK's largest match funding campaign.